It is generally admitted that the United States is in the vanguard of export control regulations. Indeed, since the Cold War, the superpower has taken into account the stakes covering the protection of its technical, technological and know-how data and has equipped itself with a legal arsenal to control the export of its information, whether tangible (i.e. material and clearly identifiable) or intangible (conversely intangible and difficult to identify such as software and related technical data).

However, since the borders appeared, basic forms of export control have always existed. For example, as early as the eighth century, Charlemagne prohibited the export outside the Carolingian Empire of Frankish swords, whose specific alloy of steel made them both light and very resistant. He even forbade blacksmiths who mastered this technique to travel outside the empire. This is the first documented instance of a state decision to control the export of military goods. This ban was confirmed by his grandson, Charles II the Bald, with the Edict of Pistres in 864. During the US War of Independence, one can also mention the 1774 British decree taken during the reign of King George III to prohibit the importation of on firearms and gun powder into America. Since then, export control has continued to develop and take more sophisticated forms. 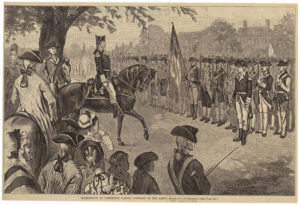 When George Washington took command of the Continental Army in 1775, he obtained only 40 barrels of gunpowder out of the 400 that were to be delivered by Congress. The difficulty in obtaining them was due in part to the UK import ban.

From an international point of view, export control reflects above all the expression of a state’s sovereignty. Its main aim is to guarantee the national security of a state by ensuring that exports of its military or sensitive products do not ultimately harm its interests. It is also used as a foreign policy lever to strengthen or, on the contrary, crystallize geostrategic ties with other states. However, while export control remains largely a state prerogative, it is the subject of increasingly advanced measures of coordination and harmonization, whether it be:

From the company’s point of view, export control has two interests:

Previously perceived by industry as a strong regulatory constraint, export control is now considered within the companies concerned (in the world of defense, aeronautics, energy, electronics, etc.) as a risk, against which it is advisable to guard by anticipating its potential consequences. To this end, companies have set up internal teams dedicated to this issue, created processes, inserted clauses in their sales or purchase contracts, etc. Today, export control is seen as a competitive advantage enabling a company to operate in an increasingly complex and legally risky environment in complete security, knowing that exports are carried out in compliance with all applicable laws – and therefore avoiding serious criminal or civil penalties, which can go as high as several hundred million or even several billion euros in fines.